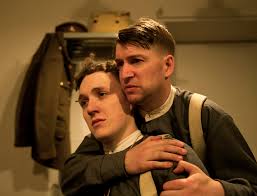 I have been in Collins Barracks lots of times, I know quite a bit about the First World War, I know the grim realities of conflict that shattered the heroic illusions of many young soldiers, but never have these things been more alive, or more striking in my mind than as I watched Pals- The Irish at Gallipoli this afternoon. Telling the story of the 7th Battalion of the Royal Dublin Fusiliers at Gallipoli, this immersive piece gives a powerful insight into the horrific experiences of a group of young Dublin rugby players on the battlefields at Gallipoli and presents the audience with striking messages about conflict, friendship and attitudes towards the Irish members of the British army at the time.

As it brings the audience through the experiences of the soldiers; of leaving their families, of the trenches, of snatching moments of fun amidst the destruction with songs and games, the agony of being injured in battle, and the later lasting agony of revisiting those moments even long after leaving the front lines, Pals switches between raw, painful reality, and equally moving, terrifying symbolism to bring to the fore the real experiences of these men.

The repetition of the phrase “Would Ireland be proud of us?” is a potent one, which is crucial for the soldiers in the piece. When we later see the image of a woman mechanically throwing envelopes on the ground with the names of the dead, or the sight of a man crying in terror and agony on the ground, this question becomes a potent one for the audience, calling the varied historical perspectives on Irish members of the British army into sharp focus.

The superb creation and writing of the piece was brought to life with energy and feeling by the excellent cast, comprised of John Cronin, Liam Heslin, Laura Murray, Kevin Olohan and Thomas Reilly. This was further complimented by the forceful and impressive lighting and sound design by Sarah Jane Shiels and Carl Kennedy. This piece is structured to make you feel that you are at the heart of the tale, from the actors sitting beside you telling you their story, to sitting on the less-than-luxurious beds; it all heightened the experience of the stark reality of this group of young Dublin men in Gallipoli. I was so moved and struck by the piece that, as one of the soldiers asked me to give him a cheer as he left for war, I wanted to say no, to tell him to stay, to warn him that his and his friends’ dreams of heroism and cheerful camaraderie on the battlefield would soon be shattered by the horrific reality of the war. It took a few minutes after leaving the performance for that sense of concern and fear for the soldiers to leave. This was a powerful, consuming piece of theatre that brings history to life with expertise.

Pals- The Irish at Gallipoli runs at the National Museum of Ireland, Collins Barracks until 30th April