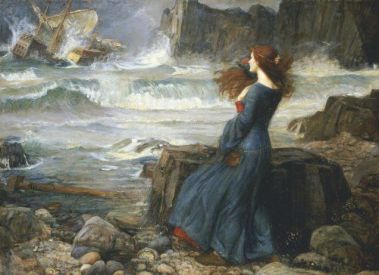 I’m no purist when it comes to Shakespeare; adaptation and reinvention are part of what has kept the bard alive for the last few centuries. C Theatre’s production of The Tempest alters many aspects of the play, swapping the genders of certain characters, presenting an unconventional Caliban, and condensing the production into less than 90 minutes.

Some of these changes were very successful, with Prospera and Ariel commanding the stage and delivering strong performances, and the same actor who played Miranda doubling as an entertaining Trinculo. However, other changes did not sit as well with the production, leaving questions as to the reasoning behind the director’s decisions. One such change was the portrayal of Caliban as more of a petulant teen than a bitter and angry subject of Prospera’s rule. Singing his anger as he strums an electric guitar takes away much of the credibility of the character; when he, Trinculo and Stephano plot to murder and usurp Prospera as she sleeps, it does not feel like a plausible threat to Prospera’s life. Similarly, though some comedic additions to the productions were effective, there were numerous others that detracted from the power of the story. The sight of Miranda and Ferdinand grappling with enormous novelty chess pieces does not exactly evoke the romantic ending of Shakespeare’s script. The ending   was also weakened by the changes made to Gonzalo’s character which rendered him a shallow and uncertain character whose relationship to Prospera is not portrayed with any definition.

However, there were some strong points to the production worth mentioning, including the imaginative design and staging which made full use of the garden it was staged in. With Ariel and her spirits flitting amongst the audience, it is hard not to get caught up in the magical world of Shakespeare’s final play.

Though visually charming, C Theatre’s production of The Tempest unfortunately sacrifices the strength of  some of Shakespeare’s original script in favour of contemporary references and easy laughs.