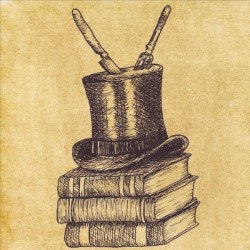 Charles Dickens, author of such novels as Hard Times, Oliver Twist and Great Expectations, wouldn’t exactly spring to mind as a cheery soul (though there can be no doubt that he has written some belly laughs dotted through his works), however, C Theatre’s production Dickens for Dinner takes his classic A Christmas Carol and turns it into an irreverent comedy.

After warming their audience with soup on the way into the auditorium (no pleas for gruel here), C Theatre presents a story of Scrooge, failed popstar and confirmed curmudgeon. Narrated by a leather-clad Dickens, this 1980s themed take on the classic novel maintains a surprisingly strong connection to the source material, while seemingly changing just about everything in some way. As in the original, the story revolves around the fact that Scrooge hates Christmas; good luck to anyone who utters the words “Christmas Number One” in his presence. He is visited by the spirits of three famous musicians who remind him of the mistakes he has made in his life and the changes he needs to make to avoid the same purgatorial fate as his late musical collaborator, Shirley Marley.

Full of self-referential gags and clever word-play on Dickens’ original material Dickens for Dinner is by no means a serious literary examination. It is a silly and witty production that serves as a light-hearted introduction to a classic story.

In a similar vein, C Theatre presents Shakespeare for Breakfast, in which they dissect Macbeth and stitch it back together in the shape of a comedy rather than the tragedy Shakespeare wrote it as. From the very start of the show, when the actors remind us that we cannot call the play or character by its real name and so re-name it McGary, it is clear that this is a production that, rather than indulging in any reverential treatment, will turn the bard on his head and tickle his feet.

The show takes modern references and references to other Shakespeare plays, blending them together to create this humorous tale of McGary’s dastardly attempts to become President of the Thistly Bottom Allotment Society, spurred on by his rather spoiled and power-hungry wife, and some unconventional witches wearing Love Island t-shirts.

Once again retaining the original plot while playing with the finer details, C Theatre create an hilarious production of Macbeth, sorry, McGary, which delights in its own adept silliness.