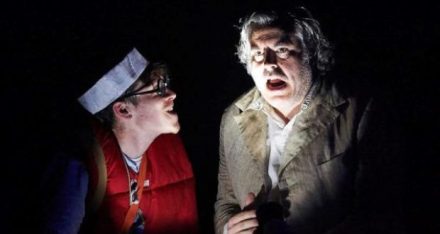 Originally published on The Reviews Hub.

With eight films released since 1933, and another planned, King Kong has been a cinematic stalwart for over eight decades. Despite, or perhaps as a result of, his status as a classic cinema character, bringing Kong from the screen to the stage is almost as daunting as bringing him from Skull Island to New York. However, Daniel Clarkson and Owen Lewis present an entertaining and effective production that finds ever-inventive methods of overcoming the difficulties of scale and perspective that the idea of putting Kong on stage presents.

King Kong (A Comedy) blends the original story with contemporary and currently topical satire and classic comic devices to create a hilarious and clever show that wins its audience over within minutes.

The classic wordplay and slapstick gags throughout are both sharply written and well performed, with each actor demonstrating strong comic timing and delivery. It must, however, be mentioned that on this particular night, during one raucously funny scene, the actors did corpse repeatedly, which detracts from the theatrical efficiency of the joke; the actors laughing is akin to a magician revealing a trick as he performs it.

Outside of this scene, the timing of delivery and the physical humour in the production, when combined with the versatile and expressive lighting design by Tim Mascall and the set design by Simon Scullion, is adroit and impressive.

Both pop-culture and political references are integrated well into the script, with pointed comments about misogyny, Trump, Godzilla, and other varied horrors of the modern world scattered
throughout the show. The characters, caricatures of the characters from the original (with a few comic extras thrown in, such as “Token guy”) make liberal use of stereotype and stock features, but with classic comic inversions that make them dramatically self-aware. It is largely this self-awareness that makes King Kong (A Comedy) as successful a comedy as it is.

From the clever design to the strong performances, and the classic gags to the little details such as the monkey themed snacks and pre-show music, King Kong (A Comedy), is a well crafted comic take on a classic of the cinema.