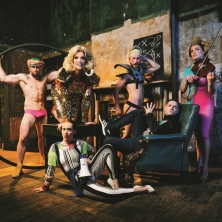 Imagine you have landed inside the whirring, vivacious minds of some of the best and brightest artists and activists in the city. Now imagine that has been amplified and condensed into one 90 minute multidisciplinary spectacular, and then add in a few thousand volts of electricity with a generous dash of pure magic. All of that imagining has still only brought you halfway towards the artistic and political extravaganza that is Riot.

From Jean Brodie to Jesus, and circus to poetry, Riot takes uses every skill and idea imaginable to take a long hard look at our attitudes towards change, while hosting a rousing and unforgettable party. To name just a few examples;  The Lords of Strut test the limits of physical agility (and of clingfilm), Up and Over it captivate the audience with a variety of dance routines, utilising everything from skipping ropes to Dutch Gold, and Ronan Brady wows with graceful and powerful circus skills as he showers the audience with smouldering glances and Tayto. The audience is never allowed to leave the edges of their seats as the excitement and drive builds and builds.

Interspersing this variety of acts, are the indomitable Panti Bliss and Emmet Kirwan. Panti provides comedy and hard truths in equal measure while making a medical boot seem like a fashion statement. However, Kirwan is the true star of the show. Dublin’s most scintillating wordsmith delivers a charged performance that captures the thoughts of thousands into just a few metrically suberb poetic segments. The music and movement of his words matched the revolutionary energy of them; his is not poetry to talk about change, it is poetry to enact it.

Not only are the performances stunning, but McMahon’s direction, a  sharp lighting design by Mark Galione and vibrant costumes by James-David Seaver are the icing on the cake that turn excellent performances into an excellent show.

Riot does what it says on the tin; it is an hour and a half of an artistic riot. It is an energising and engaging piece of political theatre as well as an unadulterated celebration of skill, passion and possibility.

Riot runs in the Spiegeltent, Merrion Square until September 25th.