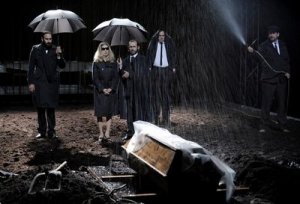 Berlin Schaubühne’s production of “Hamlet” came highly recommended to me; however I sadly cannot pass that recommendation any further. This production, directed by Thomas Ostermeier has been generally very well received but, though elements of it were very impressive, I was disappointed with it overall.

The show opened with a striking dumb show at the burial of Hamlet’s father. This very impressive visual scene with no dialogue did, in a way, set the tone for the rest of the piece. However, I must say that I found this opening scene, with the dark, shadowy pre-set, the slapstick antics of the gravedigger, the stony faces of the other characters, the ever building music and the tension this all created, to be the high point of the production.

After this scene, there was a return in the direction of the original script with the celebrations of Gertrude and Claudius’ marriage and Claudius’ ascension to the throne. I on the other hand was not celebrating as this scene marked the introduction of the radio microphone which was quickly to become very much overused. There were points at which it was a powerful dramatic tool, such as in the appearance of the ghost, but for the most part it felt like a gimmick. This can also be said for the live video feed that was used regularly throughout. There were many devices like these that began very quickly to bring the production down. The worst of them was without a doubt when Hamlet (played by Lars Eidinger whose performance was for the most part very good) broke the fourth wall and began to interact with the audience in English. He had a moment where he introduced a DJ-like persona to his character and another where when audience members left the auditorium during the performance he called out to them, stopped them and questioned them on why they were leaving. This was unnecessary and irritating as it broke the flow of the piece without any real reason or benefit and came over as nothing but a blundering attempt at alienation.

Elements like these dominated the production and it seemed to me that they sometimes overtook the plot in terms of importance in the eyes of Ostermeier. The story, on occasion, took a backseat in favour of attempting to shock the audience or provide a radical gesture. This, in my opinion, gave the whole production a contrived air that began to bore me as a spectator.

Despite these flaws, I must mention the excellent technical and musical features of the production. The set, designed by Jan Pappelbaum, was very well designed with an exact balance of versatility and aesthetics. This was complimented by the atmospheric and minutely detailed lighting design by Erich Schneider. Finally, as I mentioned before, the music in this production, composed by Nils Ostendorf, perfectly brought the emotions and action of the play to a new level of vitality.

I understand why the director did what he did in creating such madness on stage to mirror Hamlet’s insanity and throw a new perspective onto the play. The right idea was there and this production could have been brilliant. Indeed, it had many of the elements of a great production but it took them too far and added gratuitous action that seemed to serve no purpose but to shock the audience. Berlin Schaubühne’s “Hamlet” tried too hard, pushed its boundaries too far and consequently it unfortunately derailed itself.