Originally published on The Public Reviews 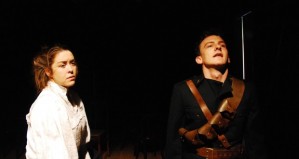 Rebel Rebel (part of this year’s Show in a Bag series) is an engaging and interesting snapshot of the 1916 Rising through the eyes of two of its participants, Helena Molony (Aisling O’Mara) and Sean Connolly (Robbie O’Connor).  With nothing but a table and chair in the centre of the room, O’Meara and O’Connor bring their characters’ experiences of the rising to the audience with a vitality and volatility that successfully captures the wider social climate of the time. The combination of the changes in tone, the fear they obviously feel, and the more mundane problems they face because of the rising; all combine to create a complex web of personal and national history.

Rebel Rebel is bookended by the a performance of W.B. Yeats’ seminal play Cathleen Ní  Houlihan which the characters abandon to march to Dublin Castle. This worked well, providing a structure to what is a very volatile, rapidly shifting play. However, the voice-over of lines from Cathleen Ní Houlihan detracted somewhat from the live performances as it competed with the central action of the performance, while not being easily understood itself either. The idea was a promising one; should the execution be polished it would be a very effective enhancement to the performance.

Rebel Rebel captures the idealism, and the violent and gritty reality, behind the rising, as, through Lowe’s direction, it presents snippets of the experiences of Molony and Connolly. This show is no light piece of lunchtime theatre; this show is a fast but penetrating flight through the Rising. With its gilt edges of idealism brought forward by the characters, and the threads of violence, loss and pain woven through their individual stories (and those of the Rising in general) Rebel Rebel is a compact but forceful picture of the 1916 Rising