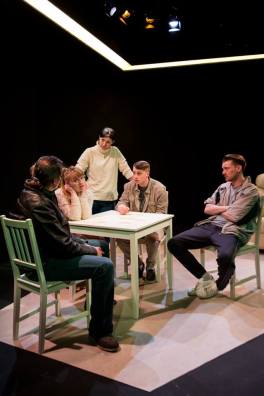 Written by Nadine Flynn, Running With Dinosaurs is a moving  story of a family in crisis that takes an honest look at the effects of gang culture and financial difficulty. Jay is in his early twenties and is trying to find his way in the world and get a job, his sister Siobhan is traversing the ups and downs of her first relationship, and Sammy is seventeen and an aspiring musician who just wants to keep his head down. Add into the mix their grandfather Frank, who has recently moved to a nursing home, their mother who is slipping back into an alcohol addiction and Siobhan’s questionable choice of boyfriend, and you have the full complement of family drama.

Though the story is well constructed, entertaining and thought-provoking, the writing can at times be laboured, with certain lines seeming unnatural in their placement or phrasing.  This is particularly noticeable in the characters of Deco (Rory Dignam) and Frank (Tom Leavey), who are hesitant or stilted when delivering certain lines. However, despite this, the cast deliver good performances, with Daniel Monaghan standing out as particularly impressive in the role of Jay. Monaghan captured the full range of the character, blending sharp comic timing with a strong, affecting performance of the difficult situations Jay finds himself in,

Lee Wilson’s direction excellently draws out the layers in the story and makes the most of the stage space in portraying them. Particularly notable is the overlapping of scenes, with one scene beginning downstage as another is ending or silently being played out upstage. This is complimented by Bill Woodland’s lighting design which efficiently directs the focus of the audience to the main scene.

Running With Dinosaurs, though at some points a little stilted, is an engaging show that takes a raw look at what it is like to traverse the transition to adulthood in a disadvantaged area rife with gang culture.

Runs at The New Theatre until 29th April.