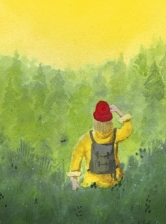 Charlie is on the hunt for the Black-Browed Albatross, the final bird on her late father’s life-list. He died when she was 20 and now, at 22, she is completing the journey he never got to make. As she adventures through the Highlands in search of the elusive bird, she hopes to rekindle their relationship that they lost before his death.

The Backpack Ensemble bring this story of a woman and her family trying to come to terms with the death of her father beautifully to life in this charming production. Losing a loved one is never easy, and especially in a situation like Charlie’s, where you had lost touch beforehand, but this production explores the experience of loss in a nuanced, astute and accessible way. Charlie’s relationship with her brother and mother, which has become more distant since the death of her father, is portrayed in an insightful way, examining the balance between family responsibility and responsibilities to oneself. Similarly, the memories of her time with her father seem so real that the audience is immediately drawn in.

The production is characterised by simple but effective devices such as the large screen used to switch between different places, as well as between memory and present, using shadow puppetry and adapting the screen to create different set-pieces. One of the most effective elements of the production was the self-awareness and conscious theatricality of the piece. The actors introduced themselves before adopting their characters, and moments of narration of what the actors were doing, rather than the characters, were peppered throughout the play. Though it employs elements of Brechtian distancing, this actually serves to make the story more engaging. By noting that they have drawn certain parts of the narrative from their own lives, The Backpack Ensemble create a space for the audience to find and examine their own experiences; this may be a made-up story, but it doesn’t mean it’s not real.

The Search for a Black Browed Albatross broaches the subject of loss in a thoughtful and honest way that is moving and entertaining in equal measure. For children aged 8+, this production is a beautiful introduction into the different ways people deal with grief, and of the hope that can be found beyond that.

The Search for a Black Browed Albatross runs at the Pleasance King Dome until 9th August as part of the Edinburgh Festival Fringe.