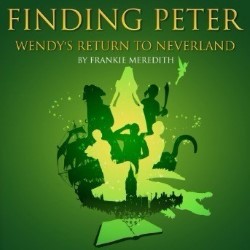 The Darling children never forgot their time in Neverland and so, when Tinkerbell flies through their window one night to tell them that Peter Pan is in trouble, they grab the opportunity to follow the second star to the right and fly straight on till morning.  Telling a story of rescuing Peter Pan from a pirate kidnapper, Finding Peter has the elements of an exciting and engaging show, but does not tie them together.

The performances, from James Tobin, Jessica Arden and Jenny Wilford, who double up to play all of the characters, often favour volume and ostensibly child-like voices over a connection with their audience. The production demands a certain level of interaction with the audience, asking them questions, and getting them to sprinkle fairy dust and think happy thoughts. However, it often feels that the performers are speaking at the children in the audience rather than to them, once again costing them that all important connection with their audience.

Alongside this, though the performances suggest that they are simplifying things for the younger members of the audience (or at least speaking them slowly and loudly), the script, written by Frankie Meredith, flits between over simplifying some elements and using phrases and words that much of the audience may not understand. Delivering lines that use difficult language in the voice used to talk to babies and toddlers does not make them accessible, rather it risks alienating an audience.

The nugget of the idea behind this show had promise, and the plot was fun and exciting, but the writing and performances left it short. Finding Peter could be a strong show, if the tone and language were more accurately pitched at its young audience.