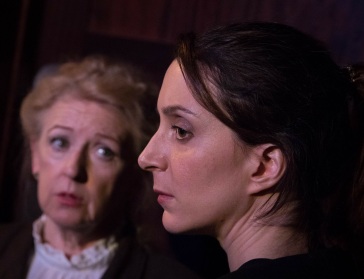 Elsa, a film blogger played by Maeve Fitzgerald, turns up at a remote house to interview horror actor, Jonathan Ravencliffe (Michael James Ford). As she is greeted at the door by Mrs. Newman, a seemingly Mrs. Danvers-esque housekeeper played by Joan Sheehy, and steps into Naomi Faughan’s classically spooky set, it seems as though Elsa is about to encounter her own real-life gothic horror plot. However, all is not as it seems. Secrets of the past are brought to light and we soon realise the real horror doesn’t lie in the werewolves and vampires of Ravencliffe’s films.

Though the pacing sometimes slows and jolts a little, Roche’s script is an engrossing story that makes clever use of the Hammer Horror movie genre as a frame. Under the direction of Aoife Spillane-Hinks the three characters are skillfully brought to life by Ford, Fitzgerald and Sheehy. Though allusions to the horror genre and tropes drawn from it are woven throughout the script, the characters and plot never rely on them; the characters resist being caricatures or stereotypes, and the story takes twists and turns into unexpected territory.

Wringer is a well-crafted, fresh and unsettling play. For a lunchtime Halloween horror fix, you won’t go wrong with a ticket to this.