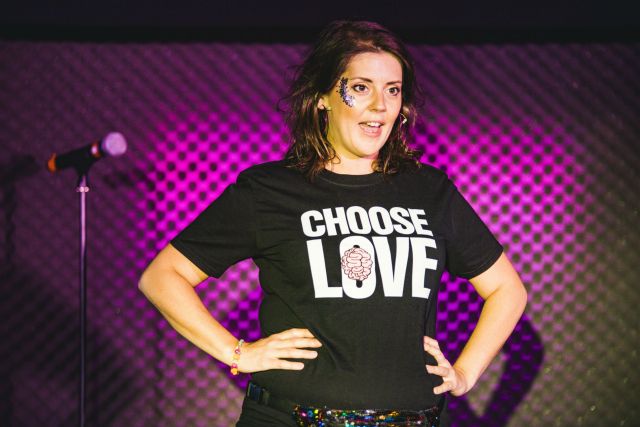 Self-professed international love-monger, Carys Eleri, takes to the stage in Ffresh to introduce the audience to Lovecraft (Not the Sex Shop in Cardiff), her one-woman science comedy musical about the brilliant neurological nonsense that is love. In her hour on stage, Eleri takes a comprehensive, comic and considered look at the loneliness epidemic that is sneakily working its way through society, and at the importance of love in life to combat it.

Telling anecdotes of her past relationships (with the memorable characters, Eddie Pie-Hands and Bernie the Beautiful Shit) Eleri takes her audience on a journey through the chemical processes of falling in love, and reminds them of the importance of all sorts of love – romantic, platonic, familial. However, this is not just a science or sociology lecture. Throughout the show Eleri accents her point with howlingly funny stories and songs about rejection, jealousy, tinder, and cocaine-addicted mice among other topics. The musical numbers, produced by Branwen Munn, are welcome earworms that will stay in your mind and provide you with residual giggles well after you have left the theatre.

Not only are Eleri’s writing and performance excellent, the slideshow that accompanies her performance on screens at either side of the stage is the source of much hilarity. I know, a slideshow in a theatre show; it doesn’t sound like it will work, but with glitzy hormones and dancing rats, and a kaleidoscopic mammary montage, this is not your average PowerPoint presentation. Like the rest of this show, it is slightly mad, and yet catches the audience and draws out common experiences that make Eleri’s escapades easy for the audience to relate to.

From the moment she walks on stage, Eleri has the audience in the palm of her hand. Even I, an avowed avoider of audience interaction, was happy to join in the audience-wide cwtch (Welsh for cuddle), and sing-along songs. Lovecraft (Not the Sex Shop in Cardiff) is an open, frank show that draws its audience in with ease as Carys Eleri not only reminds the audience that life is short and best spent in the company of others, she gives the audience a chance to enjoy the reality of it as they share an evening of laughter, chocolate and music with each other. 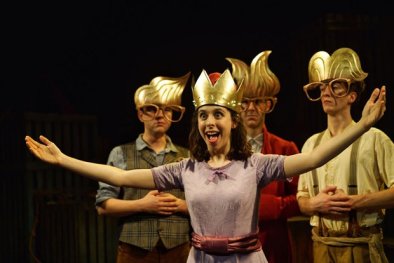 Oscar Wilde’s fairy tales, though few in number are enormous in the scope of their understanding. They are snapshots of reality through an imaginative lens that teaches vital lessons in kindness, generosity, understanding and respect. Taking the story of The Happy Prince as a frame, Wilde Creatures deftly draws elements of almost all of Wilde’s fairy tales together to bring these lessons, and the beautiful stories that convey them, vividly to life on stage.

The town has become very quiet, the beautiful statue of the Happy Prince is no more, and the Mayor has stopped children from playing in the town centre in order to keep it tidy. The town is not happy. It is decided that there should be a new statue to liven up the town square, but the question is, who deserves to be the subject of this statue? Of course the self-important town Mayor believes the statue should be of him, but the townspeople decide to take a vote. Performing various Wilde fairy tales through storytelling and song, the Wile Creatures ask whether the statue should be of Little Hans, the student, or the princess. As they tell their stories, gradually the townspeople, and the audience, learn that maybe the best way to liven up the town is not through creating a statue of a powerful (selfish, greedy or unkind) person, but by opening back up the square to everyone and caring for its citizens who are struggling.

Wilde Creatures is a lively, charming production that reminds us that “humans are the most beautiful flowers of all.”

Wilde Creatures runs at Pleasance Courtyard on alternate days with The Canterville Ghost until 26th August as part of the Edinburgh Festival Fringe.

Clowntown: I Can Do Anything 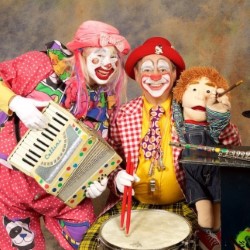 In Clowntown we don’t need money,

In Clowntown nobody’s wearing a crown.”

Candy and Dandy of The Sphere Clown Band take to the stage with their various musical instruments to introduce their audience to Clowntown, a town where you can do anything. The younger members of the audience are invited onto the stage where they are made honorary members of the town council of Clowntown, and invited to dance along to a number of songs, try out Clown exercises and enjoy some magic tricks.

This production is at times an enjoyable interactive show that was well received by its younger audience, who launched themselves into “Clownercise” and their roles as zoo animals with gusto. However, though it is a lively and entertaining show, there are times at which Clowntown finds its audience drifting as the pace draws out. It does not seem confident in itself, which leaves it feeling somewhat clumsy and haphazard. While the classic trope of the clown attempting and failing comically at something was employed effectively at times, at others it felt more that the performer was not in control. The clown character may be struggling, but to retain the audience’s engagement the performer needs to retain control and confidence. As we reached the final song, “I Can do Anything,” the haphazard feeling to the piece continued. The song incorporated performance in American Sign Language, which was a nice element, but it was the first time it was introduced in the piece, seeming more of an afterthought than an intrinsic element. Similarly, the title of the song, “I Can Do Anything” was introduced as the theme of the piece (which is also mentioned in the title), but the theme was not notably present throughout the rest of the show.

Clowntown is a fun production, with good ideas and intentions which don’t quite come to fruition over the course of the show.

Clowntown: I Can Do Anything runs at the Space @ Surgeon’s Hall until August 25th as part of the Edinburgh Festival Fringe.

My trip to see Jonathan Capdevielle’s “Adiashatz Adieu” at the Project Arts Centre was an impromptu one. I was offered a ticket a couple of hours before the show and accepted without really knowing what the piece was; I had no time to research it and my notes were taken on the back of the programme because I didn’t have my notebook with me. However, this piece was so different, so fresh that I think that even had I had the chance to know more about it before I saw it, it would still have produced the same responses, the same unsettlement and the same questions.

The show began with Capedeville, dressed unassumingly, holding a mic in one hand and a can of Pepsi in the other standing in the centre of the stage projecting a nervous air towards his audience. This feeling of testing the waters continued as he broke into an a cappella Madonna medley, pausing between each song, hand in his pocket, closed off; but soon we could feel him find his feet as the strength of each song grew and he began to show off his vocal abilities.

From the Madonna medleys Capedeville moved to much more shocking, harrowing songs in French (with surtitles). This gave us an idea of what was to come as the show progressed. Following these songs Capedeville quickly moved into playing out scenes from real life; a stilted conversation with his father, a distressing scene in a hospital with an ill relative and an all too familiar scene of drunken antics outside a nightclub.

Capedeville portrayed these scenes with great skill, switching between characters vocally with ease and distinction. Midway through these scenes he also changed character in terms of costume, switching into drag at a dressing table upstage. The onstage costume change complimented the raw, pared down feeling of the piece. There was no flashy fantasy in this; it was a bare snapshot into Capedeville’s mind.

The performance was further strengthened and complimented by the excellent lighting by Patrick Riou. Riou kept the lighting simple in terms of colour and used effects sparingly so that when they were used, they had a real power. From the beautiful yet unsettling reflections from the mirror ball to the spotlight which created the powerful separation between Capedeville and the other singers; the lighting was superb.

I only have one minor complaint and that is to do with the surtitles. Generally they were very good, but I found there to be some inconsistency in translation at some points. There were some parts in French that were not surtitled and consequently would have been lost on any members of the audience who did not understand French. This is, I think, a pity as they were no less important than any other lines.

Without a doubt, this was an unsettling piece. I know that during it I hardly knew what to think or how to react and judging from the occasional moments of uncertain laughter from the audience; I doubt I was the only one that felt that way. However, this unease felt intentional and I think it worked with the piece. This, for me, was something truly new and different. I was left thinking and reflecting upon it for some time after I left the theatre behind.