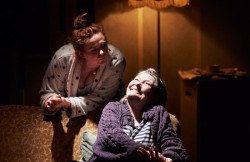 Phillip McMahon and Raymond Scannell’s Town is Dead, tells the story of Ellen, a woman in her late sixties, as her estranged husband’s daughter appears on her doorstep while she is in the midst of packing up to leave her apartment. Described as “a play within music,” this production takes some of the style and format of a musical or operetta and reclaims it for real life. Instead of drop-everything musical numbers, the music gradually builds and fades from speaking to singing with the tone of the text, keeping the story tied to real-life while effectively utilising the expressive power of music and movement.

McMahon’s writing is that of an artist with a deep understanding of not only his craft, but of his surroundings. In tune with every nuance of dialects and references, McMahon brings to life characters that one could easily bump into on the way out of the theatre or sit next to on the bus home, yet presents them in a fantastical way suited to his medium. This grounding in everyday characters, characters with little money but a wealth of experience, is reminiscent of works such as The Threepenny Opera. The audience is seeing, not a sequinned, time-stepping character from another world, a royal, a deity, a lofty tragic hero,  but characters who are as close to real people as they can be on stage.

Sarah Jane Shiels’ lighting also plays an enormous part in the building and fading of tone in this play. Perfectly balanced, the design asserts itself throughout; nothing seems extraneous or incidental. Bathed in Shiels’ lighting design is Paul O’Mahony’s set, which is also well considered to compliment the tone of the play. The screen half-concealing the musicians (which Shiels and McMahon make excellent dramatic use of ) and the slanting, oddly-angled walls of the apartment suggest the unusual interplay between the gritty realism of the story and the theatrical style of the piece.

Town is Dead faces harsh experiences and challenging issues head on with balance, insight and style.  In Dublin’s answer to Brecht and Weil, McMahon and Scannell create a play that is at once highly theatrical and powerfully down-to-earth.

Town is Dead runs at the Peacock until 9th July.