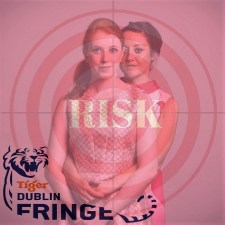 Risk is risk and consequences are consequences. Two sisters, one criminal empire – and a few obstacles in their way lead to a tale of intrigue, family ties and a whole lot of murder.

Written and directed by Diane Crotty, Risk tells the story of two sisters, Frankie (Lisa Tyrell) and Aggie (Susan Barrett) who must work together to face the gangs of London to save their father’s kingdom after his death.  Both Tyrell and Bennett deliver engaging performances, each performance complimenting the other and creating a natural sibling dynamic.

Crotty’s script is a well-woven, classic gangster story with a contemporary tone. Both characters have a strong personal stamp which is established within moments of each beginning to speak. There are some lulls in the pacing of the piece, which loses some of the sense of excitement that is built up. However, overall it is an entertaining and sharply constructed script.

Working with a simple set, the direction of the piece is inventive and smart in its use of movement and spacing to aid the sometimes quite cinematic cuts from scene to scene. This is further complimented by Colm Horan’s simple but effective lighting design.

Overall Risk is an entertaining and sharp production that will take you on an exciting hunt through the world of London’s 1960s gangsters.

Risk runs at the New Theatre until September 24th.