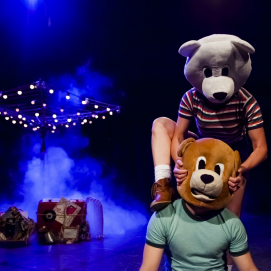 Up and Over It are an exciting and talented dance duo, and this show reflects that. What Into the Water does well it does excellently, however, outside of these things there are serious gaps in the production that must be addressed.

Presenting two characters that appear to have washed up in a new place, and their exploration of their unfamiliar surroundings, Into the Water is poorly paced with too little of anything to create an engaging story between dance sequences. The dance is impressive and captivating; the choreography and execution cannot be faulted. However, the construction of the show around it is lacking in structure and content. We know as little about the characters in the end of the show as we found out in the first five minutes. Little happens to drive their exploration of the space and neither character develops through the piece.  Cleary’s character comes across as mean and bullying to Harding’s but there is no move to address that; there is, overall, very little message or driving thought behind the show. This simplicity would make one think that the production was suited mostly to pre-school age audiences but the darkness and intensity of some segments negates this, leaving one wondering who exactly the production is aimed at.

Similarly, the design is a mixed bag, with stunning projection work but poor lighting design. From a rain storm to a sky full of stars, the world of the show is beautifully created around the characters. However, the basic lighting design is far too dark. Any of the eclectic and charming set beyond centre stage is barely visible and whenever either of the performers ventures to the sides of the stage they too are shrouded in darkness. It is like putting a carpet on a dirty floor; the projection may have been impressive, but without a strong overall lighting design its effect is weakened.

Had Into the Water dispensed with its story and just presented a series of dance vignettes, or alternatively had it included another artist or more time devoted to story, it would have been much more effective. As it was, it was a show with potential that fell just short.

Into the Water runs in Smock Alley until September 24th.