Monday: Watch Out for the Right! 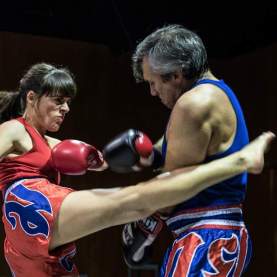 In this production, the first of a series of seven, choreographer Cláudia Dias recreates a boxing match, but this is a boxing match like no other. In a captivating fight, Dias provides an examination of love, politics, human connection and identity.

Set up like an actual boxing match, with the timekeeper maintaining a steady flow of questions, asking the audience difficult questions about colonisation, love, politics, and “the European Crisis” among other topics. As the questions build to a conclusion of sorts, so too does the boxing match. Starting with slow, precise sparring and growing into an intense fight, the match evolves through stages of combat, respect and love, keeping the dancers and audience on their toes. There are points at which the pacing seems to drag slightly, some sections that could have been shortened, but overall it is an engaging and provoking piece of theatre.

It seems an unlikely metaphor, but the boxing match provides a powerful vehicle for questions such as “Are we at war or averting one?” “Who are we fighting?” and questions about the violence of power and wealth. As the match moves from the focus of a sport to the intensity of real life, so too does the audience’s engagement with the subject matter in question.

Monday: Watch out for the Right is a thought provoking piece of theatre that uses its unusual setting to open up new opportunities to question and debate the changes occurring in European society today.

Monday: Watch out for the Right runs in the National Stadium Ringside Bar until September 20th